Woah, that sucked. Lose by 10 to the Hawks and then a loss by whatever to the Celtics. Both on the road, of course.

What actually is going on with this team? I don’t know.

But while I have your attention, let’s write, talk, and tweet through this.

The Sixers can’t win, shoot, rebound, or play defense on the road. I don’t get it but it’s tough to watch at times.

The Jekyll and Hyde Sixers this season is one of the more frustrating things I’ve seen in a long while. Take out anomaly’s like the Christmas game (at home) and the 14 point dismantling of the Celtics (on the road) and what you have is literally a Jekyll and Hyde team. 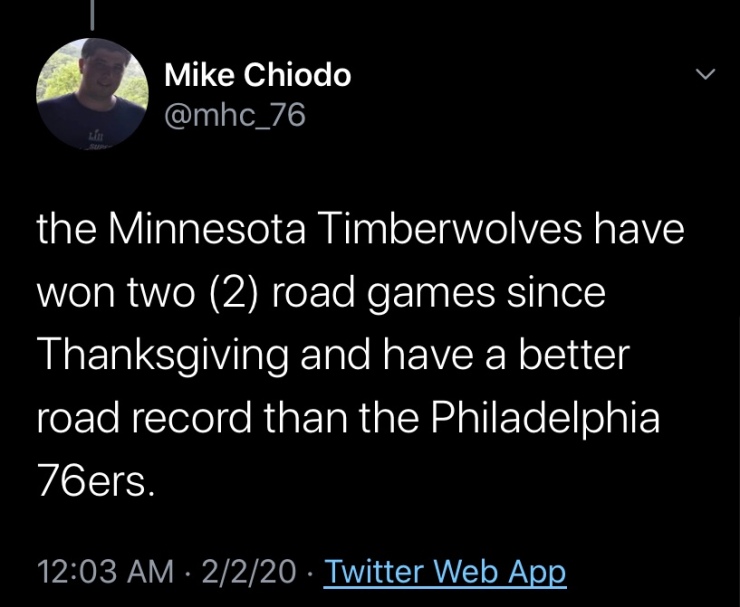 This factoid from Mike pretty much says it all.

It’s kind of unbelievable at this point. They are literally a shell of themselves in the road. And this far into the season. The only thing I think we can hope for is they end up a 2/3 seed and only have to win 1-3 games on the road in the playoffs. Or they figure it out. So, take that for what it’s worth.

Joel Hans Embiid. It’s crazy to think I actually wrote that. The Sixers best player and all star starter is a “bad” for them.

It’s true, dude is getting his stats but at times they seem very hallow. Playing body language police, in my opinion something is off about Joel.

Last night against Boston Joel shot 1-11. Now he was 9-9 from the FT line so that’s a plus. But here is the problem, well 2 problems not enough shots and horrific positioning by Joel against Theis. That’s just lack of effort. Joel is bigger, better, and stronger than Theis, and it would just take a little more effort, a little more strength to move him. Joel didn’t do that last night, and it’s not the first time we’ve seen his lack of effort this season.

I don’t what is wrong with Joel, I have theory but it’s all speculation and more than likely a talk for another time. But as someone who has watched every game Joel has ever played in for this team, I 100% feel confident telling you that something is off and this isn’t the real Joel.

Alright, enough with this bad stuff let’s get to some good stuff, because in the end that’s who I am.

BENJAMIN FREAKIN SIMMONS. Ben has been kind of unbelievable in January. Honestly, may have had his best 2 games in his career. The 34 point triple double where he put the team on his back against Brooklyn and his game against the Lakers showed just what Ben can really be, even without a jump shot.

But my favorite thing about Ben lately is his free throw shooting.

In the last 6 games he has attacked the rim, got contact, and got to the line. And has shot well at the line. 75% on 61 FT’s is a very good sight to see, especially in times where it hard to see good.

This has always been a critical step that Ben had to take. And whatever sparked it, I hope it keeps going because this team needs him to continue it.

As Kevin points out, he has almost 3 times as many FTA in the last 2 months as he had in the first 2. Keep attacking Ben, keep getting to the free throw line. If Ben keeps this up, and they tweak a few things and pieces come together I honestly believe they can have a solid playoff run.

Thanks to Bodner for the transition into more good.

Shake Milton has been a breathe of fresh air in a few bad games for this team. He dropped a career high of 27 against the Hawks. He has shown the ability to hit the 3 and can get to the rim. He has filled in well since Jrich went down with a hamstring.

Shake hopefully can play himself into a piece for the future. He is signed for another 3 years, on a minimum and we know the Sixers need guys on the cheap to produce.

One little thing I’ve noticed with the young guard in his 3 games starting he has 11 assist and only 4 turnovers. Not bad for a young guard, hopefully he can continue to hold down the fort while JRich is out.

And now we need to find some hope.

As we sit here licking our Sixers inflected wounds, it doesn’t seem every hopeful. But I’m hear to tell you there still is hope.

A few key points if hopefulness

I’m not going to sit here and tell you it’s going to be all cupcake and rainbows for the rest of the season. But I do believe this team is better than we saw the last 2 games. And I’ve made it a rule, with the ups and downs of the NBA I’ve decided not to over react after bad losses and great wins.

But I am going to say there is hope, and no need to make whole sale changes. The Sixers are a good team, and can really make some noise in the playoffs. But the time to start to figure it out is now.

Time to go on a run, hopefully starting tomorrow night in Miami. LFG